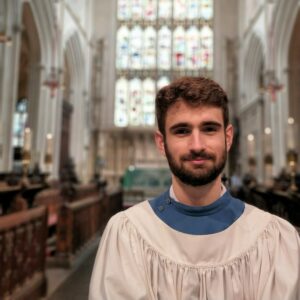 Joe Tobin is an accomplished conductor, composer, singer and musical scholar based in central London, who has worked alongside ensembles such as I Fagiolini, the Royal Academy of Music Chamber Choir, and the Cambridge Fundraising Choir. He is currently the Director of Music of the Capella Singers of Upminster, Conductor of the Children’s International Voices of Enfield, and Interim Director of Music at St Laurence Church, Catford. Joe will undertake the roles Director of Music of St Thomas of Canterbury Church, Brentwood, as of May.

Music was first introduced to Joe as a boy singing at St James the Greater Church near his family home in Leicester. Here he proceeded to sing tenor as a choral and then conducting scholar in his ten years of service before he moved to the University of York as an undergraduate to study music. In York he founded Animas, a student chamber choir, in his first year which he directed. It remains a thriving and active choir to this day. Joe was also an assistant conductor of The 24, under Robert Hollingworth’s direction, as well as a conductor of the Chimera Ensemble, the UK’s largest student-led ensemble. He was Musical Director the Drama Society’s most profitable show in its history, Give My Love to Molly, and received positive reviews for all his work.

Joe undertook several other musical disciplines in his bachelor’s degree, including editing, arranging and composing many works of music including a full orchestral requiem, as well as studying Thai and Indonesian classical traditions. Joe was also awarded in his academic efforts, securing the essay prize for The Wagner Complex, his fresh insights into the relationship of Wagner and Debussy’s music, and graduated in 2018 with first class honours.

In London Joe has worked professionally as a conductor with many choirs including Ingatestone, Brentwood and Woking choral societies, Royal Academy of Music Chamber Choir, Choir of the London Oratory, Cambridge Fundraising Choir, Herts County Youth Choir, The Harborough Singers, Hanover Choir, Imperial College Chamber Choir, The Birkbeck University Choir, North Herts Guild of Singers, and St John of Jerusalem Festival Chorus, as well conducting the BBC Singers in masterclass and concert.  Joe has been studying for his master’s degree in choral conducting at the Royal Academy of Music under the tutelage of Patrick Russill, completing his studies in Summer 2020.

Encouraged by a prize in the BBC Young Musician of the Year finals, Anthony took up a place at the Guildhall School of Music with a full scholarship in the class of Joan Havill. After winning all the major prizes for keyboard, and graduating with the rarely awarded ‘Premier Prix’, he entered his first international piano competition, winning the third prize at the Maria Canals competition in Barcelona. After further success at competitions in Milan and Madrid, he accepted an offer to study at the International Piano Foundation in Como, Northern Italy where for two years he received tuition and guidance from luminaries of the piano such as Leon Fleisher, Dmitri Bashkirov, Marta Argerich, Karl Schnabel and Alicia de Larrocha.

Anthony was the first prize winner of the Making Music Young Artists award, the Countess of Munster Musical Trust and the Myra Hess prize. Winning these prizes gave him the opportunity to perform more than fifty concerts across the UK, including concerti with the Liverpool Philharmonic Orchestra and Oxford Symphony Orchestra as well as recitals at the South Bank centre, Wigmore Hall and Sheldonian Theatre.

After relocating to Madrid, Anthony won the second prize and special prize for Spanish Music at the Fundación Guerrero International music competition which gave him performance opportunities all over Spain and Portugal, including a series of recitals for RTVE, Spain’s foremost broadcaster of classical music. During his time in Spain, he became deeply involved in Contemporary music, and for two years was professor of chamber music at the Escuela de Musica Contemporanea in Salamanca.

On returning to the UK Anthony alongside his career at the keyboard he took up the position of Musical Director at the Penshurst Choral Society where highlights included performances of works such as Beethoven Mass in C, Mozart Coronation Mass, Bach Magnificat in D, Haydn Te Deum and Puccini Messa di Gloria as well as Beethoven’s Third Piano Concerto which he directed from the keyboard.

His work in education has included three years as Director of Music at the Mead Preparatory School and he continues to teach piano at his own studio in Tunbridge Wells and the Knole Academy in Sevenoaks, Kent

Website by Helicon Designs
To give you the best possible experience, this site uses cookies and by continuing to use the site you agree that we can save them on your device. Cookies are small text files which are placed on your computer and which remember your preferences/some details of your visit.OKRead more